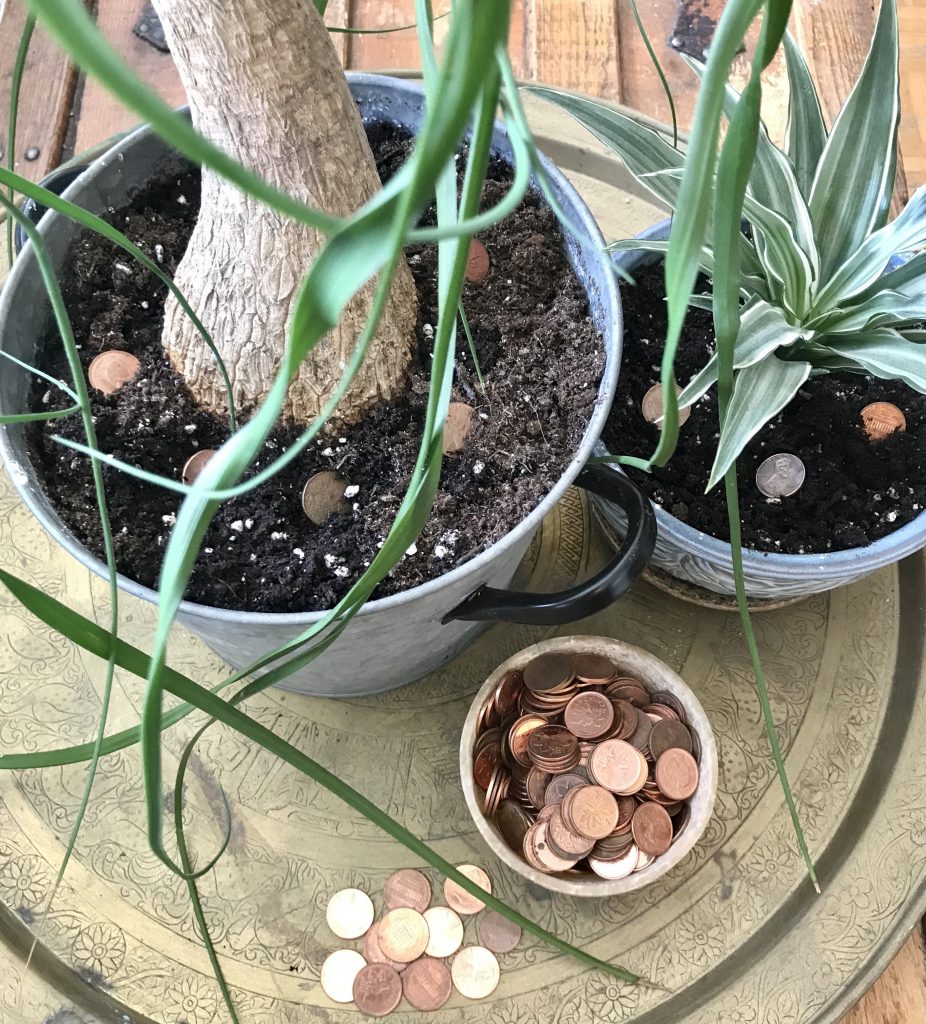 Are Pennies a Green Thumb’s Friend? 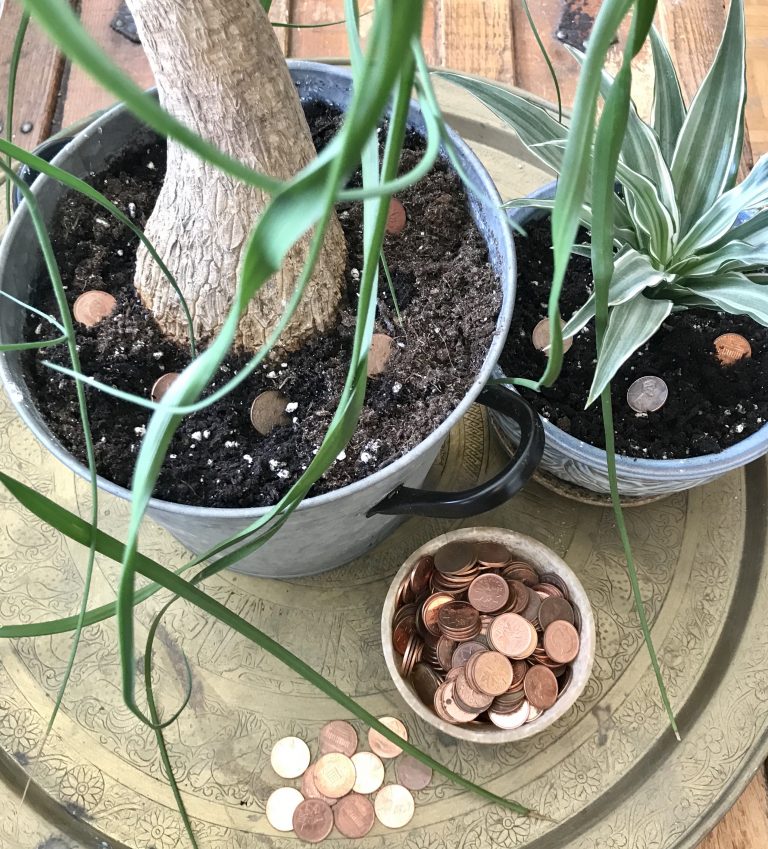 Find a penny, pick it up, and then… throw that sucker in the dirt! (You’ll be happy you did).

When I was about nine or ten, I lived across the street from a retired woman named Nancy, and as I fondly recall, she was a bonafide plant lady. I used to enjoy dropping by her house unannounced and watch as she tended her houseplants. She’d give me tea in a bone china cup, and I’d sit there and waste her time. In hindsight, I’m not sure she really wanted me there gawking at her and loitering in her small bungalow, but every time I’d show up, she was always patient and kind.

From what I remember, Nancy used to throw all sorts of strange things into her soil – coffee grinds, orange peels, eggshells, and pennies. She taught me a lot about plants over our visits since I’d incessantly ask her question after question (as children do). And, it was she who taught me that adding pennies to your soil is not just some whimsical decorative touch, but is actually done in the belief that it benefits plant health.

After all these years, in fact, I’ve found that some of her tips have stuck with me, including the addition of pennies to soil — which I diligently use among my houseplants.

Since I live in Canada, the ability to find pennies is a bit trickier than it used to be, since they officially went out of legal tender in 2012. But, lucky for me, I was also raised by the “find a penny, pick it up” belief. So for years, I’d habitually check the ground for coins, which I’d hastily add to one of many chump change jars I have at home (I still do this), so I have plenty to toss into my plants.

But, ridiculously, things sometimes get a bit heated over my reckless use of pennies. You see, my partner’s hobby is numismatics — essentially, a fancy word to say that he collects coins, analyzes coins, talks to others about coins, visits coin shows, and so forth. He finds it exciting — I beg to differ, but whatever floats your boat (after all, I’m strangely obsessed with plants, so I shouldn’t judge).

An example of our penny dispute goes as such: I’ll burrow into our stash of coins, and pull out a few pennies, chuck them into the soil of any new houseplant I get, and walk away. Then, he’ll immediately go and dig them out like a squirrel searching for nuts, all to ensure they’re not special, or worth a million bucks, and so forth, leading us to a battle of wills. Oh, what to do with the damn pennies — to covet, or to bury, that is the question.

But enough about that! The question is, do pennies work, and why add them to your soil? Well, let’s find out.

All Pennies are Not Equal 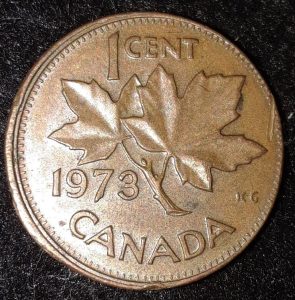 First, and foremost, it’s important to know that not all pennies are equal. Say what? Yep — they’re not equal.

If you’re going to use pennies for your plants, you’ll want to ensure that they’re older, since newer ones contain more zinc and other metal compounds rather than copper, and will be useless for your intended purpose.

So, if you live in Canada, look for pennies that are minted before 1996.

From the USA? Use pennies dated 1982 or earlier.

And if you’re from the UK, try pennies produced before 1992.

How do Pennies Help? 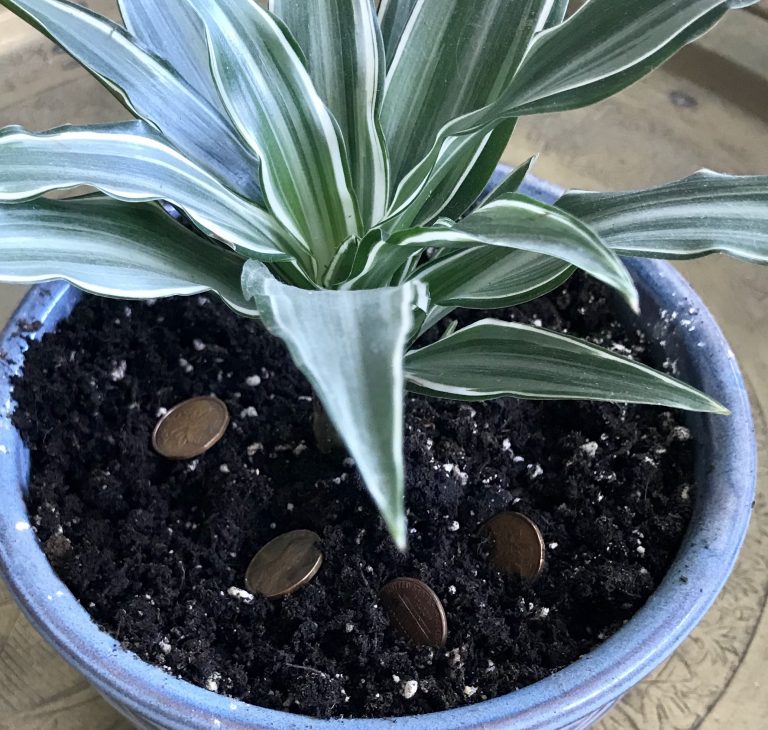 If used outdoors, pennies are thought to be a natural slug and snail deterrent, since copper causes an unpleasant sensation similar to static shock for any gastropod who dares to cross over them (or, so I’m told). I’ve personally never used pennies for this purpose, but I’ve read that the results vary greatly, with some of these creatures not giving a hoot about the presence of pennies, while others avoid them at all costs. A personal preference, I guess?

If you want to get crafty, try creating a penny ball by gluing pennies to the surface of a baseball (or similar object), which can then be kept nearby plants you hope to keep out of the line of any pesky slugs.

Or, if you want to get serious about discouraging these critters from encroaching on your garden space, but still want a natural approach, try placing copper wiring around your plants, since I hear it can work better than pennies.

Did you know that many commercial gardening fungicides contain copper? Indeed, copper is known to be a great way to deter fungus growth. And, because of copper’s antifungal merits, we often use copper for our water pipes.

So, if you want an earth-friendly fungicide, try adding pennies to your garden. It will work wonders.

Plant a few pennies a couple of centimeters into the dirt among your tomatoes, potatoes, lettuce, and other fruits and veggies to lessen the likelihood of blight — which is generally caused by fungus growth.

Not only do pennies help out in the veggie patch, but they’re also great for indoor plants for the very same reason. And, by adding one or two to a vase of water, they can even increase the lifespan of freshly cut flowers by deterring plant-rotting bacteria.

Most healthy soil contains low levels of copper, and, depending on the type of soil you’re dealing with, pennies might actually improve the quality, particularly when concerning highly acidic or alkaline dirt, since these environments tend to deplete copper levels.

So, by adding a few pennies to your plant mix, the beneficial nutrients should encourage your plants to grow healthy leaves and blooms — I swear, it does wonders for my potted plants.

On a side note, too much copper can actually cause copper toxicity, which stunts the growth of plants, and will cause a sickly appearance to their leaves. And, just to make things confusing, these also happen to be the same visual indicators of a plant suffering from copper deficiency (sigh).

Fear not though — a few pennies will do more good than harm, since they don’t contain nearly enough copper levels for this unfortunate outcome (It’s when you get into copper infused fertilizers that you need to watch out). But, for reassurance, you can always use a soil analysis kit that’s easily found online or in most garden centers. By doing so, you can best determine if your green friends need more or less copper, along with other important nutrients.

When used in the right amount, It can’t be denied that copper is a tried and trusted garden companion, but what about pennies specifically?

Well, sure, some will continue to believe that a penny’s place in the garden is simply a useless myth that won’t die, whereas others (including myself) will continue to rely on pennies as a helpful green thumb’s trick.

No doubt, the proof is always in the pudding, and the best way to find out is to test it for yourself — If anything, they look nice, and you can make a wish on them!