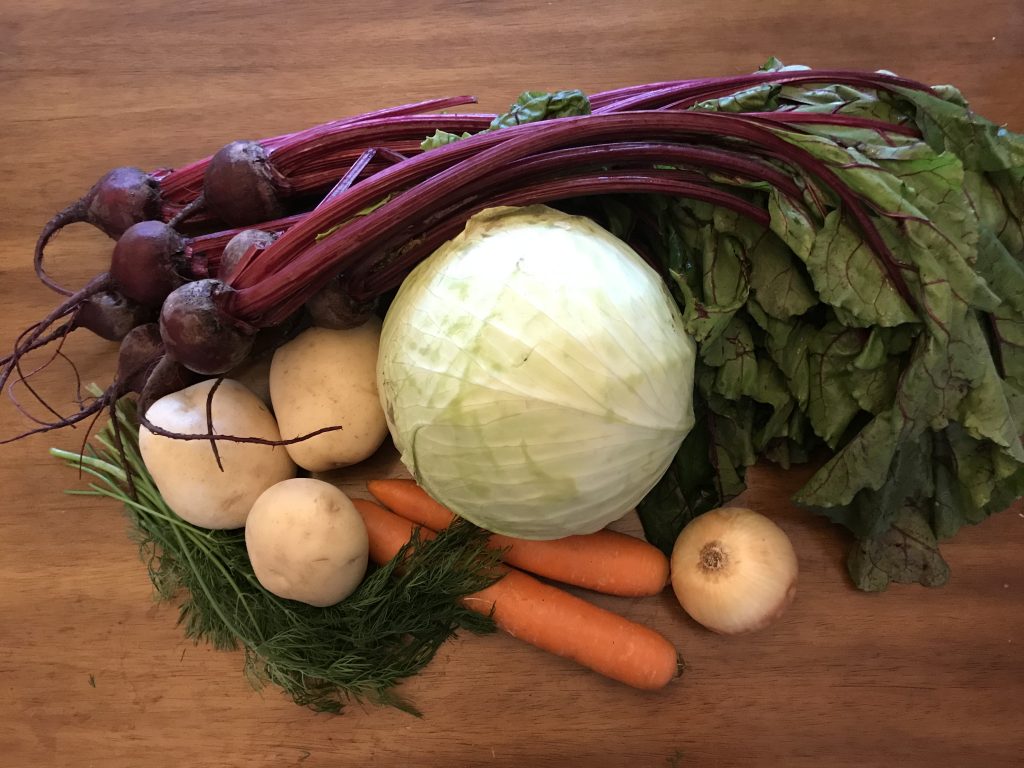 Use those root veggies for Mennonite borscht

My cousin recently called me to ask for our family’s borscht recipe, and it dawned on me that it’s never been written down. Although I can whip it up with little thought, the exact quantities, cooking time, and so forth have always been an “eye it” type of method that comes as second nature once you’ve done something so many times. Do you have family recipes like that? Surely, most people do.

Well, as it happens, I was stumped by her question and gave a vague reply stuffed with gibberish fillers like “you know” and “whatnot”. Not helpful, I’m sure!

After the call was over, I realized that someone really should write this recipe down once and for all. So, that evening, I went about making a pot of borscht and actually paid attention to what I was doing with quantities and timing —as opposed to mindlessly doing it. 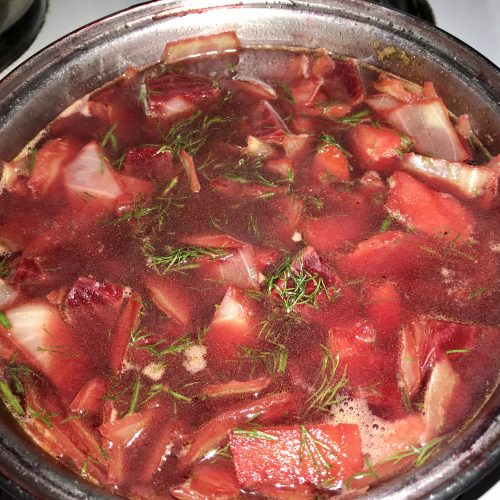 Before we get into how to make borscht, let’s discuss what it is!

Borscht — what is borscht, some of you might ask?! Well, essentially, it’s a rustic, Eastern European root vegetable soup, containing beets as the star ingredient — perfect for a chilly day when you want something hearty and comforting.

Popular across a variety of countries, this soup has many regional variations, but one thing can always be counted on — the use of root veggies and a good dollop of sour cream.

As mentioned, the borscht recipe I’m going to share with you is an old family one that’s been passed down through countless generations. My grandmother learned it from her father (who probably learned it from his parents) and passed it onto the next generation — a tradition that I hope will continue with my children.

Having immigrated from eastern Ukraine (or, at the time, Russia), my great-grandfather’s family brought many of their Mennonite traditions with them to North America. However, over the years, only a few of these customs have endured — one of them being a borscht recipe.

Thinking about how wonderfully diverse my family’s background has become, it’s understandable that over time and assimilation, various traditions slip away, leaving only a few obscure ones to remain as part of our identity. But, in keeping this identity alive, it’s these small reminders that become so important to hang on to.

I’ve always found Mennonite cooking to be wonderfully flavorful and truly filling — No fuss food for the soul, one might say.

Of course, as many people will tell you, borscht isn’t only a Mennonite thing. It’s widely eaten across many cultures, from Poland to Germany, Latvia, Russia, and Romania, with endless variations of this traditional “sour soup” in existence.

Served hot, or cold, with or without cabbage, or meat, and so forth, what I’ve learned is that this beloved soup is as much part of my great-grandfather’s culture, as it is to so many others.

Perhaps you’ve been lucky enough to have successfully harvested some root veggies from your very own garden this year. If so, then you’ll want to set some aside for this simply fantastic borscht recipe that I’m about to share with you!

But, if like me, you’ve not had the chance to, then a quick trip to the grocery store will bring you all you need for this simple and budget-friendly soup. 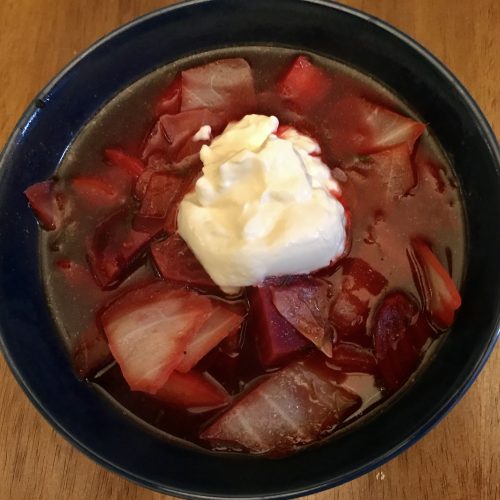 Ok, so here it is — our family recipe. I may get in trouble sharing it, but you know what? It’s too good not to share.

Perfect for those of us who aren’t master soup makers, this easy recipe is both foolproof and satisfying. And, the great thing is that you can adapt it however you like. Feel like adding ham to it? Or, making the broth from scratch? Go for it! Want to omit one of the ingredients? Feel free — but I wouldn’t skip on the beets though (after all, this is the trademark borscht vegetable. It also paints the soup a beautiful rich red).

* If making your stock from scratch, then good on you — this is the traditional way! Just ensure you’ve simmered it for enough time that it’s rich and dark in color. You’d then want to add the veggies straight into it and gently cook further.

** Fresh dill is best, but dried will do fine as well if that’s what you have on hand.

As many of us enter into the cooler months, the use of root veggies — either recently harvested from your garden, or store-bought, is the perfect answer to keep you warm and full. But, sometimes mashed potatoes or boiled beets on their own can be a bit boring, so why not put all these wonderful veggies to more interesting uses — make a big comforting pot of borscht to sip and savor!

As you can see, making this recipe is not only ridiculously affordable, it’s also quick and sure to satisfy. And, with a tiny bit of prep and cooking time, you’ll be left with the most delicious and healthy soup to fight off the cold weather.